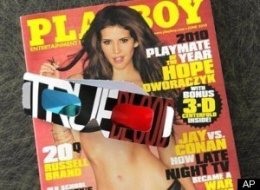 CHICAGO — Playboy readers who can only imagine what it would look like if a centerfold jumped right off the page are getting new specs to help them see into Hef's world.

The magazine's June edition hits newsstands Friday equipped with 3-D glasses. Now the toy that has kids dodging dragons, meatballs and tall blue aliens at the movies will help adults focus on what is, at first glance, a very blurry Playmate of the Year.

"What would people most like to see in 3-D?" asked Playboy founder Hugh Hefner. "Probably a naked lady."

"I'm not a huge enthusiast of 3-D," he said in a telephone interview. "I leave real life to go to the movies and 2-D is fine with me."

If the thought of grown men sitting back in their recliners with a pair of 3-D glasses doesn't quite say "Playboy," it should be noted that a few months ago the magazine put Marge Simpson – yes, the blue-haired animated mother of Bart – on the cover and in a two-page centerfold.

"In today's print environment you have to create newsstand events," said the editorial director of the Chicago-based magazine, Jimmy Jellinek. "Marge Simpson was one of those."

Playboy certainly must do something to get more people, especially younger people, to buy a magazine that has seen circulation plummet from 3.15 million in 2006 to 1.5 million today.

Jellinek said he hopes the issue featuring centerfold Hope Dworaczyk in 3-D also reminds people that for all the infatuation with the Internet, there is nothing quite like having a magazine in your hands.

Clickthrough for the rest of the article at HuffingtonPost

Want to master Microsoft Excel and take your work-from-home job prospects to the next level? Jump-start your career with our Premium A-to-Z Microsoft Excel Training Bundle from the new Gadget Hacks Shop and get lifetime access to more than 40 hours of Basic to Advanced instruction on functions, formula, tools, and more.

Other worthwhile deals to check out:

Join the Next Reality AR Community

Get the latest in AR — delivered straight to your inbox.